Wisconsin Chamber Choir, Inc. (the Corporation) is created and shall be operated exclusively to uphold superlative musical performance standards, to promote healthy vocal technique, to promote cultural enhancement and artistic appreciation for music in various languages and from many countries, to encourage community interaction, outreach and service, and to promote choral music education for audiences and singers with a broad range of musical samplings from the historic beginnings of choral music to contemporary works, including commissioned pieces, and at all times shall operate consistent with the requirements of 501(c)(3) of the Internal Revenue Code of 1986.

A rich history of acclaim:

2019: We celebrate our 20th Anniversary with our favorite music including the Bach Christmas Oratorio in December, and our April concert featuring our founding director, Dr. Gary McKercher. 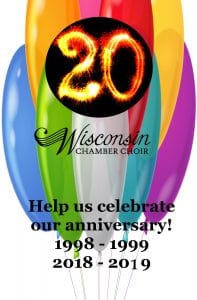 2014: In collaboration with Temple University, Philadelphia, PA., WCC commissions English composer, Giles Swayne, to write a piece for the choir entitled Our Orphan Souls for Baritone solo and choir. The piece premiered in April, 2015 with the choir’s performance of the Brahms’ Requiem accompanied by Sinfonia Sacra.

2013: WCC performs Mozart’s Requiem at Luther Memorial in Madison and the Young Auditorium in Whitewater. 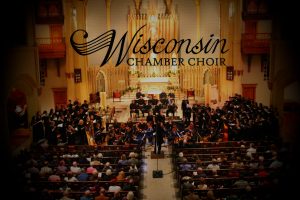 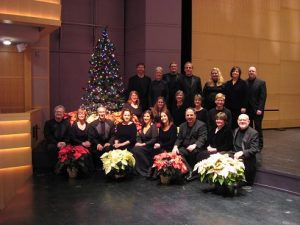 2007: WCC appears as a featured ensemble at the Wisconsin Choral Director’s Association (WCDA) convention in Madison at Bethel Lutheran Church.

2006: WCC premiers Now Show Us Your Rainbow, a commission from Atlanta-based composer Ethan Amir Zaheri commemorating the victims of the December 2004 Asian tsunami.

2004: WCC performs at the gala opening celebration of the Overture Center for the Arts in Madison, Wisconsin. 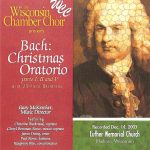 2002: WCC tours the mid-west and is the only Wisconsin choir to perform in Rochester, Minnesota’s “A Festival of Music” and in New Hampton, Iowa’s Carnegie Cultural Center. 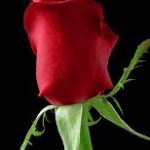 2001: WCC pays tribute to the victims of September 11, 2001 terrorist attack in a concert at the Madison Civic Center and Wisconsin Public Radio’s Sunday Afternoon “Live at the Elvehjem” series selects WCC to perform on their live statewide radio broadcast form UW-Madison.