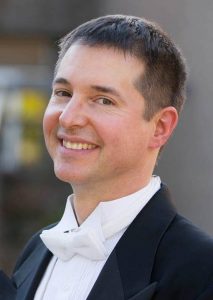 Dr. Gehrenbeck is Director of Choral Activities at the University of Wisconsin–Whitewater, where he conducts the UW-W Chamber Singers, Concert Choir, and opera and musical theater productions. He was selected as our Artistic Director since 2008, and leads the Wisconsin Chamber Choir in critically acclaimed performances of choral-orchestral masterworks and innovative programs featuring both familiar and rarely heard a cappella choral arrangements. He is sought-after as a choral clinician, and his choirs have been invited to perform at state and regional conferences and in Europe.

As a singer, he appeared with the Robert Shaw Festival Singers, Boston’s Cantata Singers, New York State Baroque, and the Bloomington Early Music Festival. He is a recognized authority on eighteenth-century performance practice, German Romantic choral music, and contemporary music. A committed advocate on behalf of living composers, his world premieres include works by Peter Bloesch, Stephen Chatman, Brent Michael Davids, Christian Ellenwood, Wayne Oquin, Judith Shatin, Giles Swayne, and Yehuda Yannay. His doctoral dissertation on British composer Swayne received the Julius Herford Prize from the American Choral Directors Association in 2007, and his article on Swayne’s Dolorosa appeared in the December, 2012 issue of the Choral Journal.

His teachers include John Poole, David Hoose, and J. Michele Edwards (conducting); Mary Ann Hart, Costanza Cuccaro, and Emma Small (voice); and J. Peter Burkholder, Don Franklin, and Thomas Mathiesen (musicology). His own teaching was recognized by the College of Arts and Communication Excellence in Teaching Award from University of  Wisconsin-Whitewater in 2011. Dr. Gehrenbeck holds degrees from Macalester College, Boston University, and Indiana University, with additional studies at the Felix Mendelssohn-Bartholdy Conservatory in Leipzig, Germany. 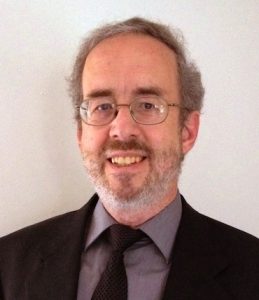 Mark Brampton Smith holds degrees in Organ Performance from the Eastman School of Music and the University of Michigan.  Currently the organist at Grace Episcopal Church, he previously served on the music staff of churches in seven states.  He was a prize winner in several national organ competitions, and gives solo concerts in numerous churches and auditoriums, including Madison’s Overture Center for the Arts.  Mark works with singers, instrumentalists, and ensembles as a collaborative pianist. These have included the Ann Arbor Cantata Singers, University of Michigan choirs, Colgate University Chorus, and, since 2012, the Wisconsin Chamber Choir.

Subscribe to our newsletter below and never miss the latest updates from us.